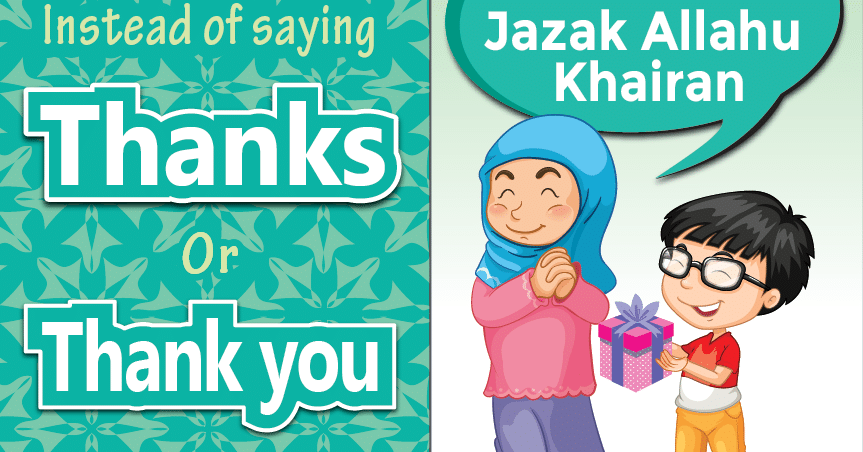 Abu Hurayra reported that the Messenger of Allah, may Allah bless him and grant him peace, said, “I was sent to perfect good character.” (Sahih Al-Bukhari)

The ability to show gratitude in any form is one that requires conscious effort, reinforcement and practice. It’s an integral component needed to attain good character. When something good is done to you, whether it be minor or large, it is part of the Sunnah to show gratitude for that action.

As Muslim parents, it is our duty to teach our children the best way to show gratitude as well as its importance and benefits. When we teach our children the value of being grateful, and how to show this gratefulness appropriately, we are building positive behaviours in them and raising them with one of the foundations of attaining good character.

At the end of the blog, you will be able to print out a FLASHCARD game you can play with your children. It will consist of 6 different Islamic Phrases for them to memorize including how to show gratitude.

What is the Best Way to Show Gratitude?

In Islam, the best way to show your gratitude to a person is by saying, “Jazak Allahu Khairan” which means, “may Allah reward you with good”. It really goes leaps and bounds beyond simply saying thank you or even giving a physical gift to someone, as it bestows on them a gift that isn’t confined to a tangible value or the materialistic world. That reward is one in which Allah (swt), who is Al-Karim (The Generous), bestows during either this life or the next..

What a powerful duaa (supplication) that not only brings goodness to the person it is said for, but also the person who says it. The question now is, how do we make this a part of our children’s everyday behaviour? Help Them to Understand its Meaning

Children may be familiar with this phrase from their interactions with adults, but they need to understand that it’s not the Arabic equivalent of simply saying thank you but a beautiful prayer for the person you wish to appreciate. This will also help instil that the gift and blessings of Allah (swt) are far superior to anything on this Earth that we could possibly give.

When they understand the significance of this phrase, they may find it easier to use it as a form of appreciation. Even if they cannot say the phrase in Arabic, saying it in English or the child’s first language, also conveys the same meaning and effect. The goal is to get them to recognize the meaning behind the words, and not to simply say it at the right times.

Teach them what the phrase means using methods that make it easy for them to understand and remember. This could include creating a short rhyme or poem, flash cards, or story telling. You can also share stories from the Qur’an that encourages us to be grateful to Allah (swt), such as the story of the prophet Ayoub (as).

Say it to Them Often

One of the characteristics of children is that they tend to learn more from what we do than what we say. This can be good and sometimes not so good. To instil and reinforce the habit of showing gratitude in our children, we as parents need to first exhibit this habit regularly. Tell  them, “Jazak Allahu Kahir” whenever they have done something good and let them see you thank other people in the same way. Repetition and consistency is key! When we make this phrase a part of our lives, our children become excited to mimic us and use it also. This will in turn make it easier for them to genuinely be grateful for any good done to them and always ask upon Allah (swt) to reward others.

Your child may be 2 years old, 5 years old or 13 years old but regardless of their age start now if you haven’t. The earlier the better, but it is never too late to curb your habits or behaviours and in turn theirs. It may take a bit longer as the kids have gotten older but it is still very doable inshAllah as long as you remain consistent and diligent in your behaviour.

For those of you who have younger kids, below are printable flash cards to help teach them what to say to one another  according to the sunnah. On one side is the traditional english saying we usually use, and on the other is the equivalent in Arabic.  It’s a great family activity to help encourage good habits while they are little. Amina is a full-time freelance writer mum living in Lagos, Nigeria. She loves to write about parenting, Islam and the Islamic Economy.

Sanaa is the Editor-in-Chief for myDeen Magazines.

We use cookies on our website to give you the most relevant experience by remembering your preferences and repeat visits. By clicking “Accept All”, you consent to the use of ALL the cookies.
Cookie SettingsAccept All
Manage consent

This website uses cookies to improve your experience while you navigate through the website. Out of these, the cookies that are categorized as necessary are stored on your browser as they are essential for the working of basic functionalities of the website. We also use third-party cookies that help us analyze and understand how you use this website. These cookies will be stored in your browser only with your consent. You also have the option to opt-out of these cookies. But opting out of some of these cookies may affect your browsing experience.
Necessary Always Enabled
Necessary cookies are absolutely essential for the website to function properly. These cookies ensure basic functionalities and security features of the website, anonymously.
Functional
Functional cookies help to perform certain functionalities like sharing the content of the website on social media platforms, collect feedbacks, and other third-party features.
Performance
Performance cookies are used to understand and analyze the key performance indexes of the website which helps in delivering a better user experience for the visitors.
Analytics
Analytical cookies are used to understand how visitors interact with the website. These cookies help provide information on metrics the number of visitors, bounce rate, traffic source, etc.
Advertisement
Advertisement cookies are used to provide visitors with relevant ads and marketing campaigns. These cookies track visitors across websites and collect information to provide customized ads.
Others
Other uncategorized cookies are those that are being analyzed and have not been classified into a category as yet.
SAVE & ACCEPT